Today was the thrilling illustration of the creative process which keeps me so engaged in life and Jell-O art. Back in December when I heard myself telling someone you couldn't even make flat dried gelatin, and that little smile took the corners of my mind, I set this part in motion.

Today I actually screenprinted on it. I know there aren't very many people working in gelatin art, practically none in fact, but I am fairly certain that this is a technique that no one has tried. It's hard to express the satisfaction of pulling it off.

I owe a huge thanks to the intrepid Radar Active, aka Indi, who came over today to give me a couple of hours so I could try my first day back in the shop. I thought I would sort som 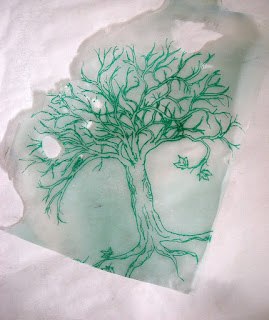 e shirts and maybe get ready to print them tomorrow when another friend is coming, but the shirts went fast (actually were a print of a design F.A.S.T. for a local school program) and before you could blink I printed up three scraps of really flat Jell-O trimmed from the pages I cut last night for my book project. Indi was as excited as I am even as she firmly insisted that I stop and go put my foot back up on its elevated pillow.

They look amazing. They curled up a little so I'll have to flatten them (Indi suggested putting them between sheets of waxed paper which shouldn't stick to them, not that they are wet). They will add color to the project which I was thinking I would hand letter mostly in black sharpie although now that I think of it, I do have some colored sharpies somewhere.

I'm still all giddy. I got the t-shirt design more-or-less finished, not the best one I've ever done, but I bought some pink camo shirts to print it on, which look like pink lemonade Jell-O with swirls of cool whip. The other ones are g 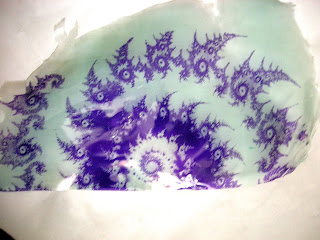 rey, because I'm only doing a one-color print so I don't have to use white shirts to achieve good Jell-O colors. They were a little expensive, but perhaps this year I will insist on selling them instead of giving most of them away. Seems like after years of free shirts some people might be able to part with some bucks for my considerable medical bills. I hope so.

But they will all get to see my innovative, fabulous printed Jell-O for free. It's impressive.

And yeah, my foot does hurt a bit. It was totally worth it, though.
Posted by Divine Tension at 3:55 PM

Divine Tension
I'm looking forward, back, and all around. On April Fools 2012 I was proclaimed Jell-O Art Queen and have learned to make the most of it! Jell-O Art continues to add joy to my various enterprises in screenprinting, writing, gardening, and all of the creative things I love to do.